My good friend Celeste had a nasty flood mess up about 90% of her house a little while ago, and they only recently finished "re-modeling" and got moved back in. She also bought this painting: 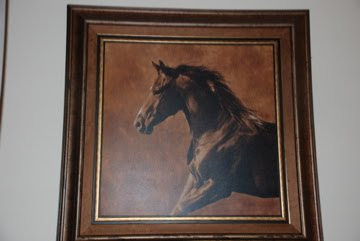 and wanted suggestions as to what to name him. She's thinking Cooper, but would like suggestions. (If you have one, feel free to let me know and I will be sure and pass them on to her.) I said that she should name him Johnny Boy. Another one of her friends suggested that she name him "Blaze". This particular name flooded me with memories, and I was forced (by an unseen, unknown power) to write the following comment on her post:

"I just noticed that one of your friends suggested Blaze...

Allow me to paint you a picture:

He was a rebel...which is why I liked him.

in their basement, and he was on "ritalin"

(We called them "hyper pills"

back in the day, remember that?)

He was also a risk taker.

He would walk in front of my swing

at recess and move JUST IN TIME to

avoid getting hit. He was that good.

Is your horse THAT GOOD?

I didn't mention this on her post, but Blaze also called me every day after school and we talked on the phone for hours. One of our favorite past times was talking on the phone WHILE also watching our mutually favorite after school television show "Small Wonder." You remember that show, yes? The one with the robot-sister-girl named Vickie who talked exactly like a robot and acted exactly like a robot, and malfunctioned and caught fire regularly (just like a robot?) yet, somehow no one ever caught on to the fact that she was a robot? That's the one. Blaze was a sensitive rebel that liked ridiculous chick shows about ridiculous robot girls. I'm fairly certain that all adds up to make the perfect man, yes? How ever did I let him slip away?

Who was your most memorable Elementary School boyfriend? I want details people! I had too many to count. (for those of you who haven't read the old installments of "Tell All Tuesday," I sort of "got around" when I was 5...and 6...and 7...and 8... and well, until the end of Jr. High.) I should start a weekly post featuring these random, near-forgotten boyfriends. (The hubs would just love that!) Reminiscing about the dashing Mr. Blaze has simply been too much darn fun!

Who were yours? What did they wear? Did they kiss you? Did they ask you to go out with them through a note? ...or a friend? Did you agree to go out with them, and tell everyone that they were your boyfriend, but never talk to them (because that would just be downright awkward) and then tell your friend to go tell them "it's over" a week or two later? OR Did you ever hold hands for so long that both of your hands started sweating and it made you feel totally awkward and nervous, and that made your hands sweat even more, but you didn't want to make the other person feel self conscious, so you just kept on holding hands...and then one of you would find a pretend reason to break the hold and you'd both nonchalantly wipe your hands on your jeans, air 'em out for a minute and then start into a fresh, new hand holding session? (This never happened to me, of course... I was just wondering if it happened to you.)

So tell me, please! I am dying to know!

Posted by the Lola Letters at 5:20 PM

2 VERY MEMORABLE BOYFRIENDS OF MINE...

In Elementary School, I was always in love with Jedd. He was funny and perverted (as much as a 7+ year old could be). He made me laugh and would draw me pictures. Growing up, we would always say that "Jedd is my boyfriend" / "Mandy is my girlfriend"... Our families knew about the other person because its the one person who was always the boyfriend / girlfriend. Other boys would come and go, but I would always go back to Jedd. Later on, we actually dated in High School for a little while before I cheated on him with my NOW husband. (Bad on me..)

OTHER ONE:
My NOW husband was my boyfriend in 5th Grade for 3 weeks. He always wore camouflage and would moon the school bus after getting off (I, too, liked the bad boys). :) We would hold hands on the bus on the way home. Yep. Pretty special. I told one of my friends that I had a dream I was going to marry him and she told me I was crazy because I was only 11... 7 years later we started really dating and 1 year later we got married...

I know you totally care about that!

I had two boyfriends-simultaneously-in kindergarten. Our recess game involved one of them "trapping" me in the jungle gym, and the one other rescuing me. It was cool. And I haven't been able to juggle two boys ever since.

Oh those are AWESOME!

MANDY - I totally DO care about that! So great. He wore non-stop camo and would moon the bus? - ha ha! Too good!

BARB- Kortland is currently playing that EXACT same game on the playground!! Her name is Hannah, and she's beautiful, and has super-long hair, and Kort is the "bad guy" trying to "Get her" while this other kid "protects" her. Trixy little vixens, you and Hannah...trixy little vixens indeed.

you can also find me on:

You are welcome to link to this site, but please ask permission before taking or reposting any photos found here.

All photographs are the property of Laura Dugovic and are not authorized for use without written permission.