“Mom, I’m a little sad right now because Sarah (who, by the way, is an entire head taller than he is and one full year older to boot) broke up with me at school today because she says she’s going to be Trent’s girlfriend for two days and then she will be my girlfriend again.”

“Bud, I really don’t like that. If Sarah wants to be Trent’s girlfriend, then tell her to go be Trent’s girlfriend, and that you are going to spend your time playing sports with your friends at recess. First grade really isn’t the time when you need to have a girlfriend. Just go play and have fun and forget about girls for awhile.” (I love how I said this with conviction, actually believing in that moment that SAYING it would make it TRUE. I had a different boyfriend every week in first grade. Sometimes a different boyfriend from day to day. It still doesn’t mean that I want Kort to do it!) 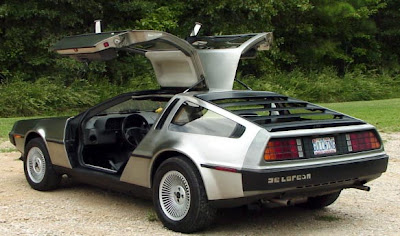 (By this time, I am feeling sufficiently nauseous and sort of want to curl up into a ball and have a good cry and, shortly thereafter, find an old Delorean in a junk yard somewhere, hop into it, and go back in time and hold my beautiful, girlfriend-less newborn in my arms and have another awesomely huge cry…)

Later that night, when I tucked him into bed, he said, “Mom, I really need a girlfriend. Help me think. Who should be my girlfriend?”

Again, I wanted to cry. Oh, and where (you may ask) is the hubs during all of this? Biting his fingernails to the bone and feeling like he’s going to barf…yes, I just said barf. He cannot believe that this is actually happening. He really shouldn’t have married me. He should have married one of those other, more conservative girls who opted NOT to be saucy little tarts in FIRST GRADE! Maybe SHE wouldn’t have passed these terrible traits on to his offspring the way I so obviously have…

I talked with Kort again, and tried to comfort him, and tried to reason with him (ha!) and finally got him to agree to go to bed.

15 minutes (or so) later, he gets out of bed, comes walking into our room, and says “Mom, really, what am I going to do? I reeeaaaalllly need a girlfriend!”

Oi! I am a tired girl. My parents are laughing at me and feeling oh so very validated right now, I just know it.

Girlfriends? My son can't stand the idea of a girlfriend. He just wants a friend. Our evening conversations that make me want to cry are like this. "Mom, nobody wants to play with me. I want a new life. Why does everyone hate me?"

Oh that's too funny! Denali shows no interest in having a "girlfriend" yet. We'll see how long that lasts.....

oh kort, don't you know you're betrothed to Sawyer? it's pointless to have a girlfriend, unless of course you don't meet the height requirements by the time you are home from your mission...
work on it dude. I can imagine no greater bliss than planning a wedding with your mom.

Kortland is seriously one of the most strikingly good looking kids ever born. Girls will be crying into their pillows over him in no time.

My little guy has had a girlfriend since before he could talk. Her name is Shandy and this year, she is 15 years old. His issues aren't that he needs a girlfriend, but when can he marry her!

His heart will be broken when she does someday get married...

WHAT! He is NOT allowed to have a girlfriend till he's 30! I feel for the little guy, it won't be the last time some dumb girl breaks his darn little heart! My stomach aches for you, UUHHH!

P.S.- Bryan needs to have a little sit down with him and show him how to handle the ladies! haha...

Thanks you guys! It helps to be able to vent about what we're dealing with. I try (at every turn) not to take this sort of stuff too seriously, but it sort of just kills me! And why the heck won't he believe me? That's what I want to know!

And Mary, that BREAKS my heart! Come be my neighbor! Kort will be his friend!!! It is SO HARD to watch the world chew our babies up and spit them out and all we can do is pick up the pieces and pray that they can make it through childhood in one sane piece!

It's so heartbreaking to me. REALLY FIRST GRADE...I mean 3rd maybe but FIRST...Kort is like one of the coolest kids I know, I'm sorry your in the middle of this chapter of life. It'll be up and down from here huh...The joys of kids and their meaness :*( boo. Love u guys

Ha! I was like you, Laura, little boyfriends lined up since Kindergarten! I'll never tell that to my daughters, though. Our family rule is no boyfriends until 18.

you can also find me on:

You are welcome to link to this site, but please ask permission before taking or reposting any photos found here.

All photographs are the property of Laura Dugovic and are not authorized for use without written permission.